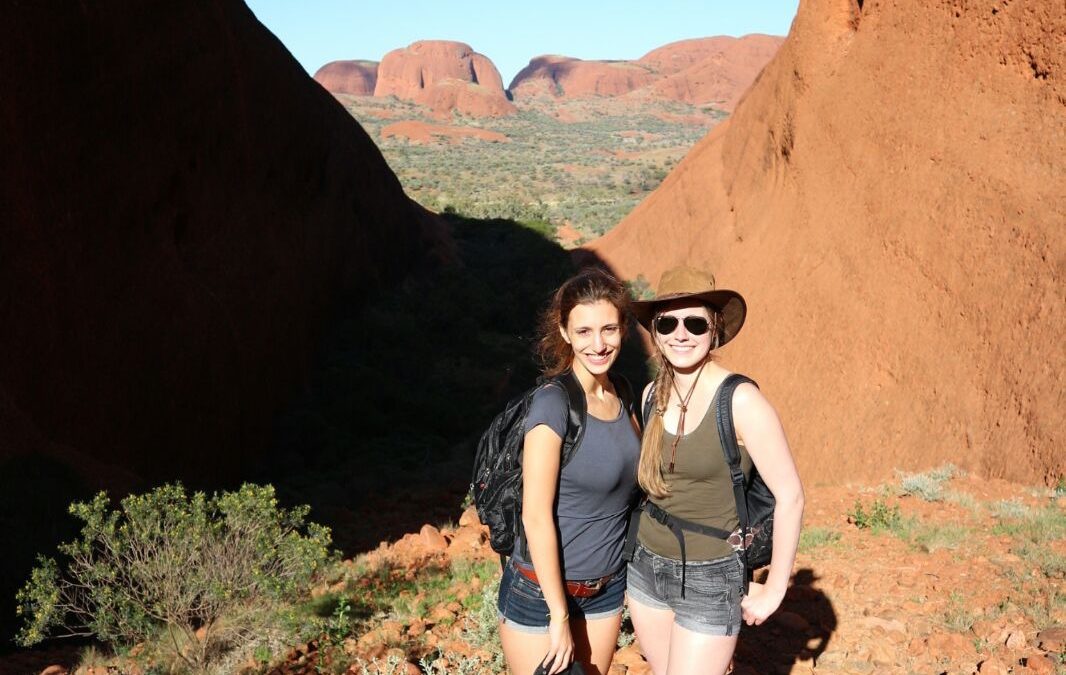 I just had the best trip in a place I never would have dreamt to see so soon in my life – Ayers Rock, or better, “Uluru”. Uluru is this giant red rock in the middle of the Australian desert that is the most sacred site of the country’s indigenous culture: the Aborigines.
This journey started barely two days after my arrival in Sydney. Still severely jetlagged, the rest of the group of international exchange students who chose to take part in this trip and me boarded the plane at 10 a.m. towards Ayers Rock. We still didn’t know each other, having only met the afternoon before, but we were a multicultural mixture of American, German, Swedish and French, making it an interesting group to begin with.

Lights in the Desert

Getting there
After a good three hour-flight we arrived at Ayers Rock Airport (yes – it has its very own, very small airport) and were immediately brought to our hotel “Outback Pioneer Hotel & Lodge”, where we ate a quick lunch, settled into our rooms (the organisers Amy and Svenja split us up, so that every nationality was present in each room – strictly gender-related, of course) and made our way to the “Town Square”. You see, the only town near Uluru consists of five hotels and a town centre with a few cafés, restaurants, shops, a grocery store, a post office and a visitor centre. Its habitants of 800 people are hotel staff. In this “Town Square”, the town centre, we were able to book additional tours if we wanted to, like a class in Aboriginal dot painting, helicopter rides over Uluru, camel rides, etc. After that, we had some time for ourselves before the self-cook BBQ dinner at our hotel. There we each got a steak and a sausage (we chose the type of meat the day before) or a vegetarian option and were able to cook it ourselves on big grills the hotel made available for us. Soon after having eaten that delicious food, we either stayed a little longer at the bar for a beer and some conversation or left for bed. We were all still pretty jetlagged after all.

The next day we met at 5:30 a.m. in order to get the bus that would drive us to Uluru to watch the sunrise. It was easy to wake up for that tour, since we all have already been up for a couple of hours because of the jetlag anyway. The bus drove us to an observation point from which we could see the spectacle and we waited for the sun to rise. The light at dawn was already gorgeous – you cannot imagine the beauty when the first rays of sun of the day illuminated that big red rock. It was a breathtaking moment that not even our cameras seemed to be able to capture properly. Shortly after, we made a guided Base Walk around the rock, where our guide shared some interesting information about Uluru’s history, the Aboriginal culture and Uluru’s meaning in it. When we came back to the hotel, we had a free afternoon before we left for the Sounds of Silence Dinner. In all honesty, it is the best thing you could do at Uluru because you eat a gourmet dinner on a sand dune under the stars. Astronomers show you different star constellations and share some Aboriginal stories with you and it is so dark that you are able to see the Milky Way. This experience left an unforgettable impression on me. The next day we hiked in the Valley of the Winds at the Kata Tjuta rocks (a gigantic rock formation close to Uluru) and watched the sun set on Ayers Rock. Aborigine women were selling their handcrafted dot paintings there. Shortly after, we went to an art exhibition called the “Field of Lights” (an open field that glows full of different-coloured lights) and concluded our trip with dinner at a five star-hotel. The very next day we boarded the plane that brought us back to Sydney.

During this trip I made a lot of new friends that made the beginning at ICMS a LOT easier. In fact, we still all hang out together – we are the “Uluru Squad”, or now just “The Squad”. It was the best decision I made for my semester abroad in Australia and I recommend this journey to anyone and everyone!